Michael Russell was just out of high school in 2005 when his father Robert’s company, Russell Equipment Inc. in Twinsburg, was going through some personnel upheaval.

Russell Equipment buys and sells used forklifts and other industrial equipment.The Western Reserve Academy graduate started going into the office to answer the phone. Then, he started doing some sales.“I was decent at it and kept on going from there,” he said.He’s been there ever since. Russell took over running the business when his father semi-retired in 2010 and now he’s working to expand the business worldwide.And it turns out that buying and selling forklifts is a lot like the equities trading career Russell was thinking about before his plans for college and career got sidetracked.The heart of Russell Equipment’s business is working with banks and other lenders who finance equipment leasing.“We do a lot of financial advising for leasing companies and banks across the country,” he said. “Before they lease a fleet of forklifts to a company they want to know what they will be worth in five years, just like when you lease a car. So we guide them through that value process and then when those leases expire, they look to us to resell those forklifts all over the world.”Most of those sales are to other dealerships, though the direct sale business, especially over the Internet, has grown in recent years.“I find Mike to be an amazing young leader,” said Rich Cochran, president and CEO of the Western Reserve Land Conservancy in an email. “He is the most impressive young businessman I have ever known personally.”Cochran said he met Russell through the Young Presidents’ Organization, a worldwide network of executives younger than 45. Now they are working together with Rid-All Green Partnership, a Cleveland nonprofit that created two greenhouses on Cleveland’s East Side that grow produce for sale and train urban young people about farming and healthy eating.Now, Rid-All and Russell are building a greenhouse on Russell Equipment’s property in Twinsburg.“I was completely moved by what they’re doing for the city of Cleveland and for the immediate community,” he said. “Not only is there a for-profit side, but there’s also a community awareness side.” 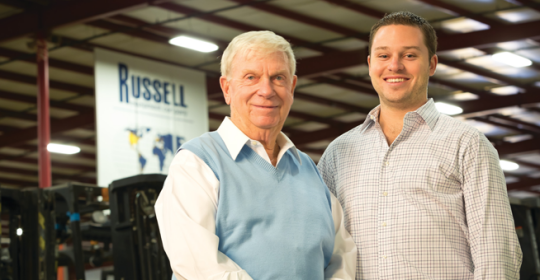 Subscribe to our email newsletter and we will send you notices of new equipment, services and offerings.